The anatomy & mechanics of breathing

Breathing. It is something we do thousands of times a day. The average person breathes 12 – 20 times per minute. For the most part, we take breathing for granted. Yet, breathing involves some of the most complex anatomy in the body. It is also deeply integrated with motor function, emotional expression (eg laughter and crying) and movement itself. In addition, conscious breathing can help regulate emotional & arousal states. In this article, I will specifically describe the anatomy and mechanics of breathing.

We all associate breathing with ‘oxygen’. Without oxygen, we would not live.

When we look at what happens on a physiological level, the primary function of the lungs is to facilitate the exchange of Oxygen (O2) for Carbon Dioxide (CO2)(ie ‘blood gases’). This brings oxygen to the blood and removes CO2 from the body. Oxygen helps facilitate the proper metabolism on a cellular level whilst CO2 helps regulate Ph levels in the body.

To this extent, whilst oxygen is critical to life, the body needs a certain amount of CO2 to survive – too little CO2 and the ph levels in the body begin to alter. As the senses in the body (located in the brain stem) that measure CO2 take priority over oxygen, then the effect of excess oxygen in the body will be to slow down or arrest breathing.

In some of the cleansing breathing practices in yoga such as kapalabhati, the effect of a forced exhalation is to release CO2 from the body. As a result of this practice, this alters the balance of CO2 and oxygen in the body. If a significant imbalance arises, then this may cause injury or otherwise result in adverse effects to an inexperienced practitioner.

Bernie Clark, one of the world’s leading yoga teachers can personally testify to the effect of practising too much kapalabhati. In my own experience, the psychological effects can be pronounced. For this reason, these are advanced breathing practices and should only be done under supervision with experienced practitioners.

What happens when we breathe

We have talked about breathing (or respiration) being the relationship between CO2 and O2 in the body. Yet what actually happens when we breathe? In short, breathing could be described as the coordination of muscles of respiration and the command & control centre in the brain. It happens on a voluntary (and involuntary) basis such as when we sleep.

How the body regulates breathing

In response to changes in the levels of blood gases, the pulmonary system adapts by adjusting the breathing patterns in the body to meet metabolic demands.

For example, exercise increases the level of oxygen usage by cells in the body and thereby raises the levels of carbon dioxide. We may notice the tendency to pant heavily after intense exercise. We may also notice the habit of folding forward after exercise where curiously enough, the greatest lung capacity according to Leslie Kaminoff is found.

If the amount of oxygen supply cannot meet up with the metabolic demands, then the body stops functioning at the desired level of performance. If you are a runner, you will know the urge to stop running – the levels of breathing are not optimal to keep up with the athletic demand. Similarly, if CO2 levels increase without leaving the body, the blood becomes more acidic leading to damage on a cellular and organic level.

Breathing as space and pressure change

The torso can essentially be divided into two cavities – the chest and abdomen. What divides these two is the primary muscle of respiration, known as the diaphragm. You can see this in Figure 2 below (as well as the other cavities in the body, which have their own diaphragm, such as the pelvic floor). 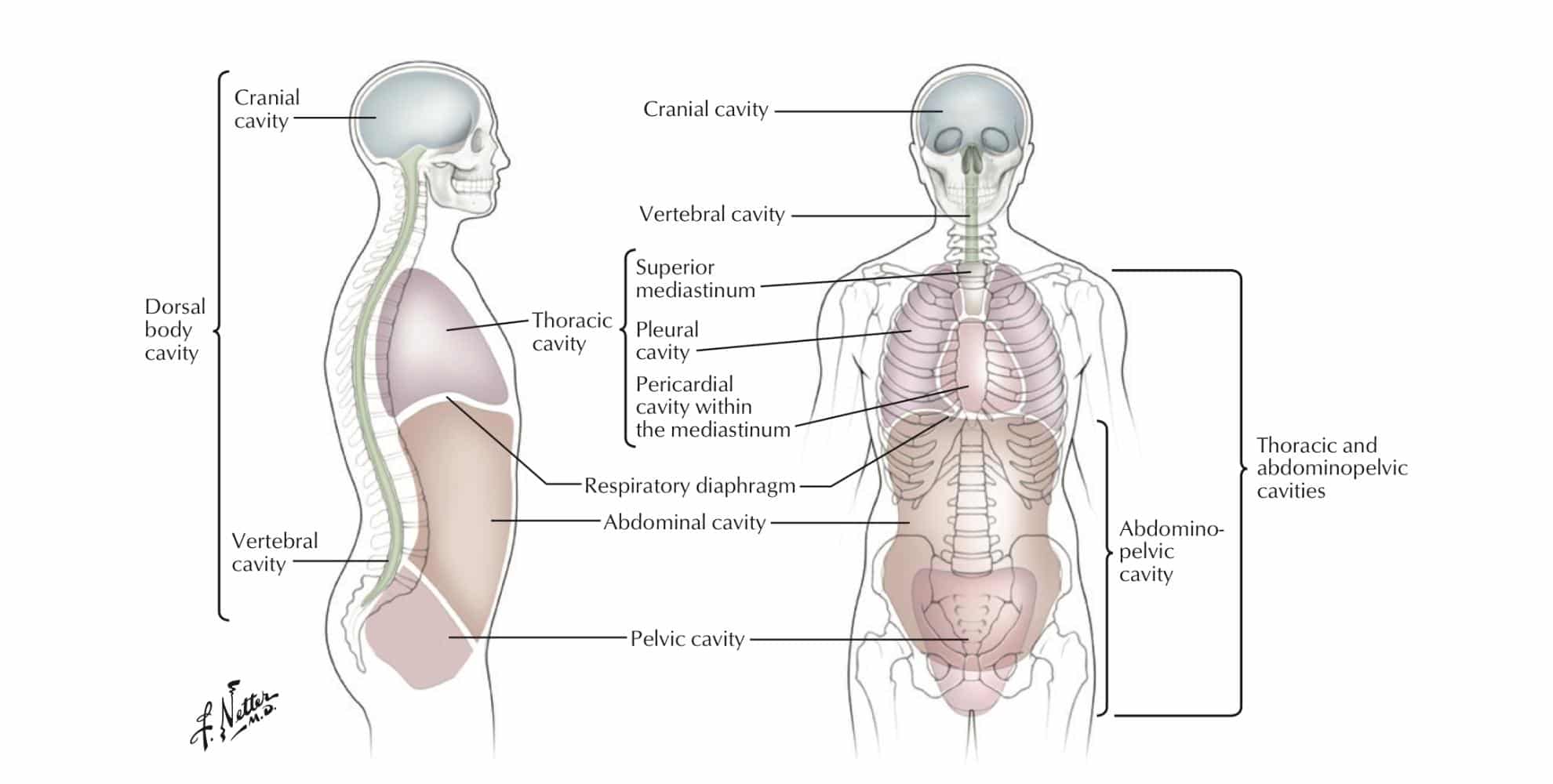 When we breathe in, the diaphragm contracts. The diaphragm lowers and thereby the volume of the chest (thoracic) and lungs increase. The increase in volume in the lungs causes a decrease in pressure in the lungs. This causes air to rush from outside to inside the body.

We can feel this for ourselves by simply placing our fingers on the space between our ribs and hip. Feel the ribs rise and the sides of the waist expand as we breathe in.

So what is the effect of this? The volume and space in the thoracic cavity increases. Meanwhile, the volume in the abdomen has remained the same – when one end is squeezed, the other one end bulges. So the shape changes, but not the volume.

To the contrary, the volume of the abdominal cavity will increase after you eat a large meal or drink (eg because of the expanded abdominal organs (ie stomach, intestines and bladder). The expansion in volume in the abdomen will cause a decrease in volume (and shape) in the thoracic cavity. This is because it behaves like a gas-filled container (similar to an accordion). Since air is expandable and compressible, so to its volume.

When we breathe out, the diaphragm relaxes (and flattens by moving up). As a result of the decrease in volume (as described in the immediately preceding section), pressure increases and air leaves the body (through the mouth or nose). The lungs however do not empty completely. Since the diaphragm is not active on an exhalation – it is being pulled upwards by the lungs (which are attached by the pleurae).

No matter how hard one tries to force expiration through the body (eg in kapalabhati), the contraction of the abdominal muscles will press upwards against the  thorax and lower ribcage. This will further cause lung volume to decrease but will never completely empty the lungs – there will always be some residual volume of air remaining in the lungs. 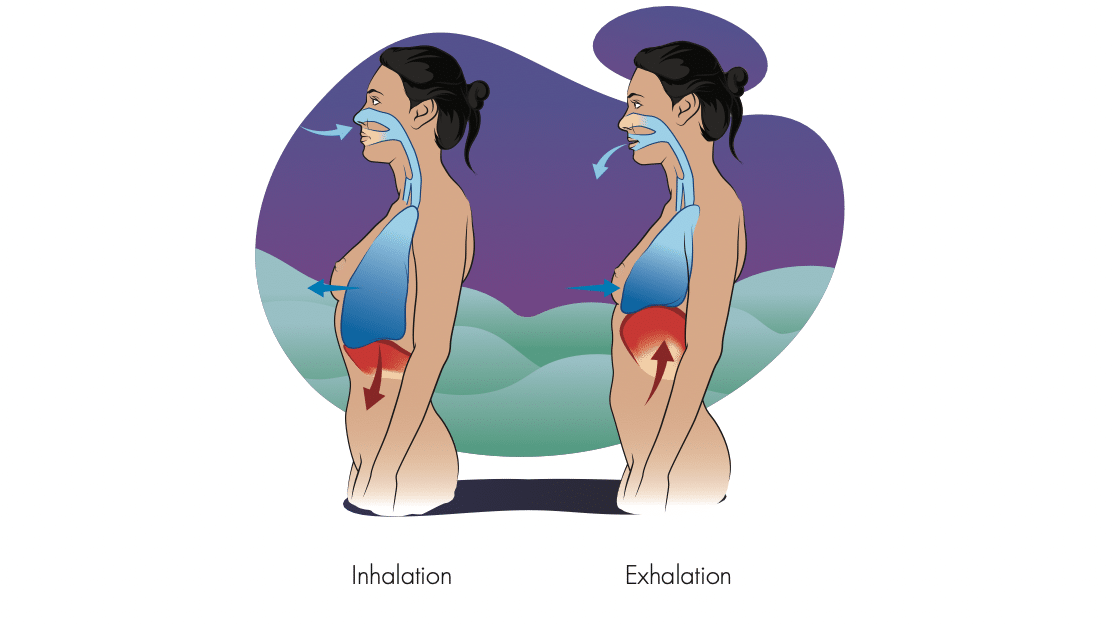 In general, ‘respiratory muscles’, are those muscles that involve breathing. They are also ones that attach to the ribs. These are known as ‘serrated muscles’ and they attach individually to the rib cage. Yoga asana and pranayama helps to tonify these muscles. Via the tendons that attach to the end of the muscles, which in turn connect to the rib cage, the ribs become more pliable. This then leads to an increased ability to articulate with more precision each rib within the thoracic cavity. From this, breathing may improve as the potential volume of the chest increases. 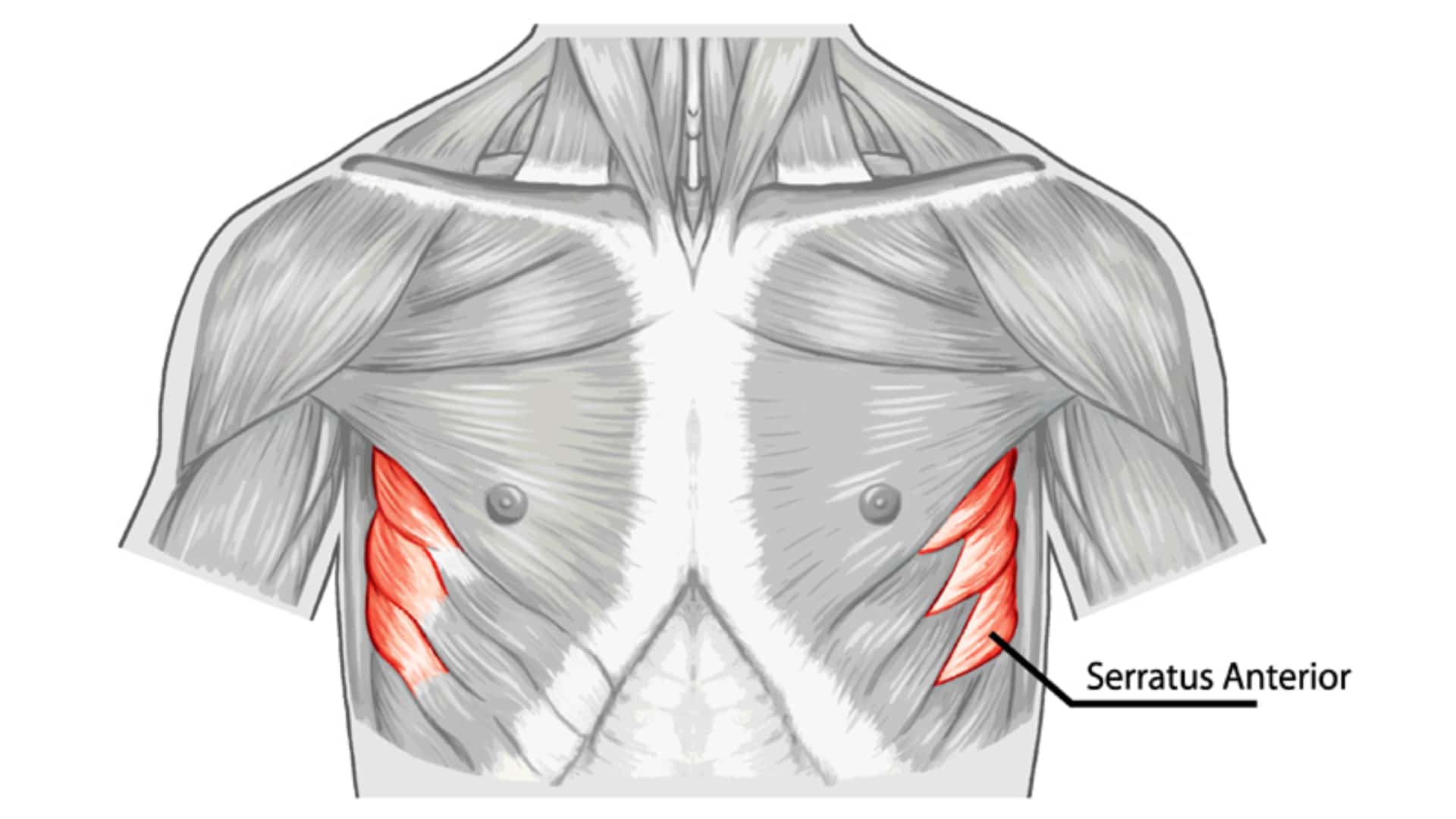 Generally speaking, the serrated muscles that sit towards the top (superior) of the ribs are involved in inhalation. Those serrated muscles which sit towards the bottom (inferior) of the ribs are involved in exhalation. Of note, the muscles that are involved on inhalation include the external intercostal muscles, as well as the sternocleidomastoid & scalene muscles. This suggests a relationship between the muscles of the neck and breathing.

On an exhalation, note the contraction of the abdominal muscles including the rectus abdominus, oblique muscle groups as well as the transverse abdominus. That is why I always suggest movements that involve stepping into a posture and/or require stability are done on an exhalation.

I would also suggest that poses that involve hip flexion, such as lunges are also done on an exhalation given the expansion of the thoracic cavity (and consequent effect upon the abdominal cavity too). I know that in pilates, a lot of the movements are cued on an exhalation too. 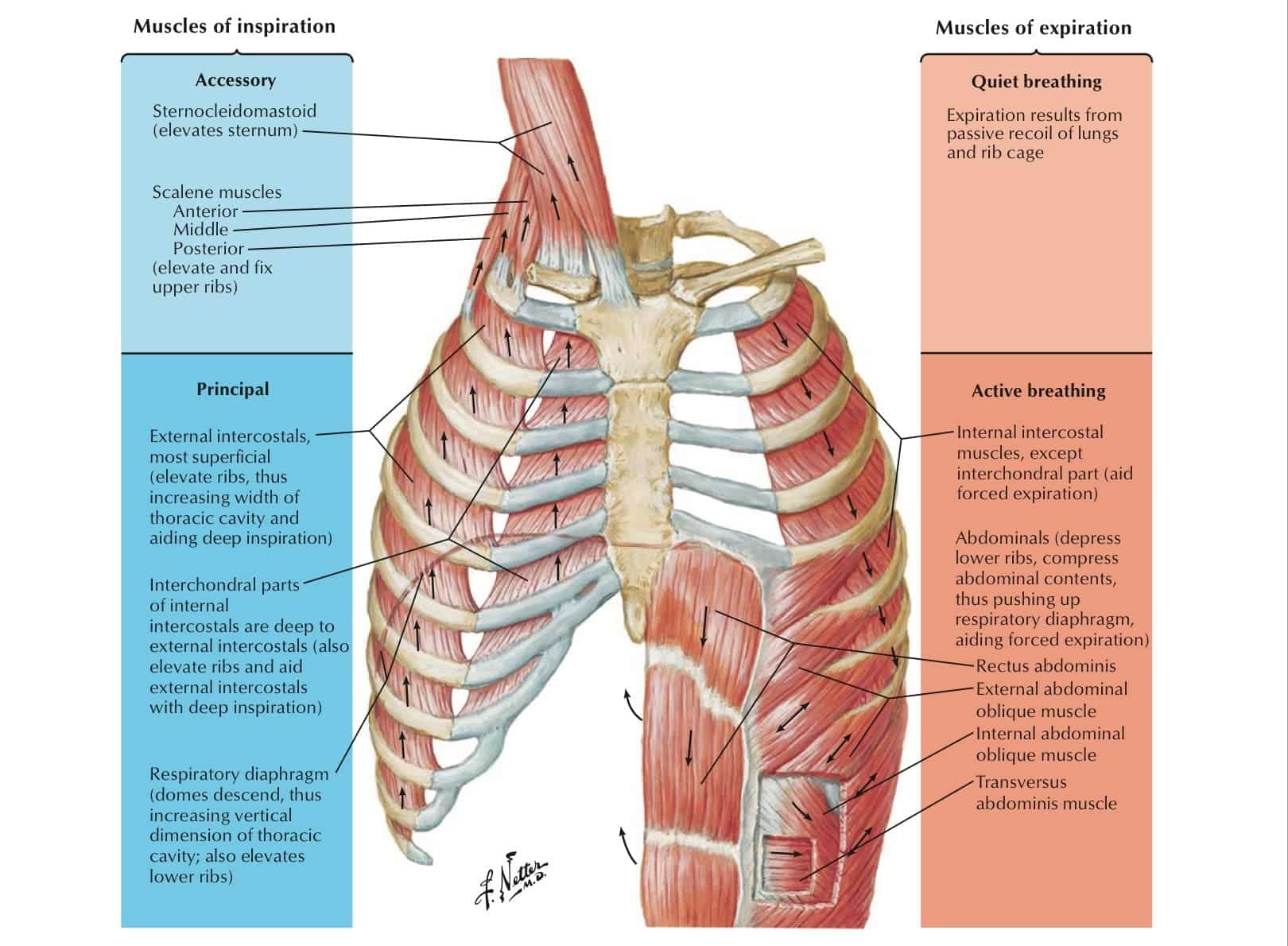 Figure 5: The Muscles of Inhalation & Exhalation

The anatomy and mechanics of breathing is fascinating. One could spend explore this topic much further given the complexities of breathing. For me, it is understanding the physiology of breathing and importance of the role of carbon dioxide in the body. Also that breathing is a function of space and pressure change between the chest and abdominal cavities. When we also understand the key muscle groups involved in breathing, we can begin to more intelligent in our yoga asana and other modalities that involve movement.

If I can help you improve your yoga practice through breathing, feel free to get in touch or email me at scott@yogibanker.com

Can you boost your immune system?

Are you interested in learning yoga but don’t know where to start?

Then subscribe to Yogibanker to receive your free guide to starting your yoga practice with confidence. Now.