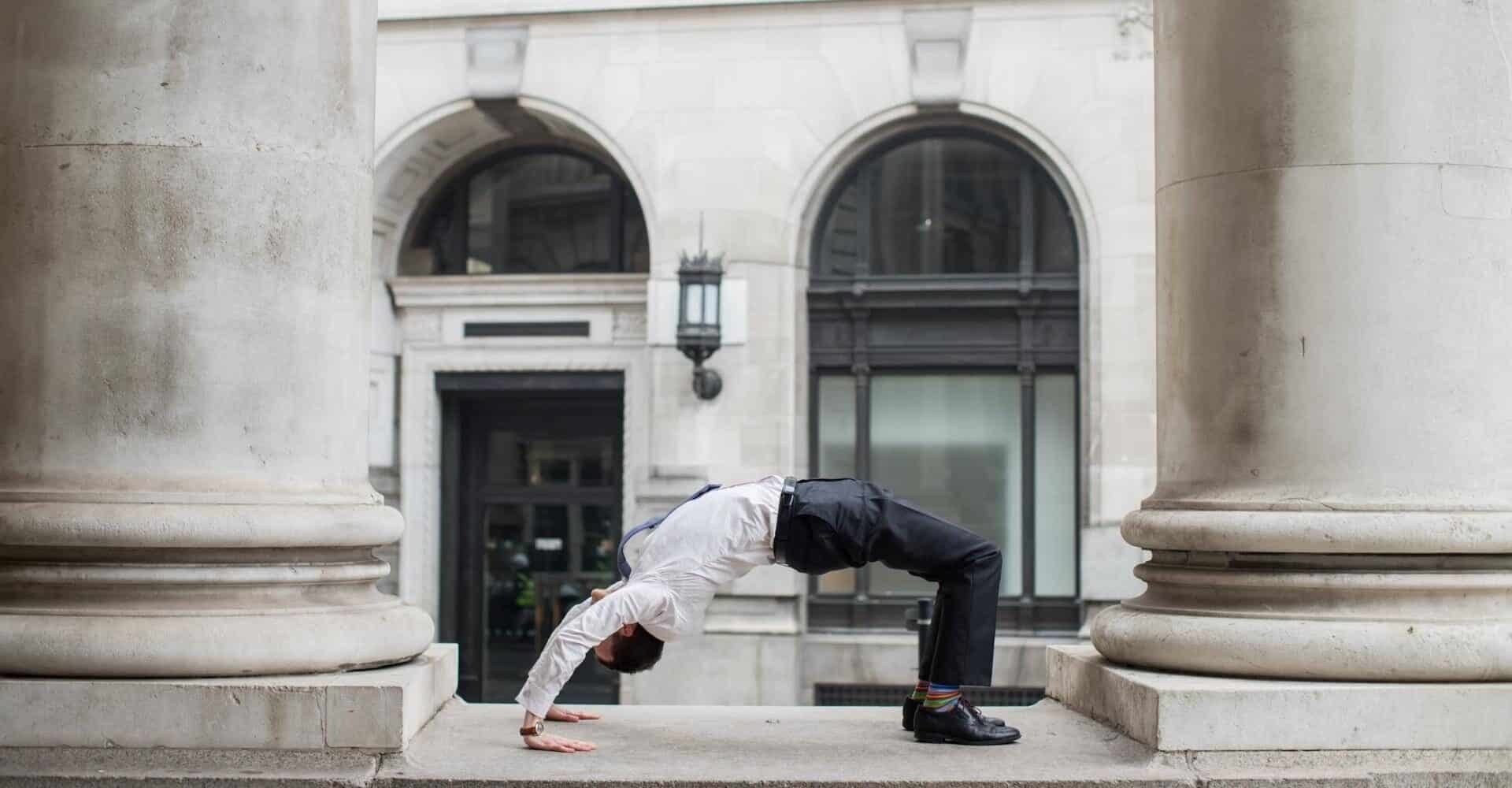 The Anatomy and Biomechanics of the Spine

In much of the life we know today, we will find a spine. The spine is the central tenet which forms the basis of how an organism communicates. ‘Communicates’, that is between the core of the body and periphery and vice versa. In this article, I will describe the basic anatomy and biomechanics of the spine and the important role that it plays in yoga.

A brief history of the spine

All vertebrates orient towards a midline. Indeed, the definition of a ‘vertebrae‘ is an animal with a backbone. This broad group of species includes fish, amphibians, birds, reptiles and mammals. If we look at the evolutionary path of human beings, our ancestry traces back to fish, which also have a backbone.

Neil Shubin explains this, in his wonderful book ‘Your Inner Fish’. Neil started to notice the change in anatomy of fish in the fossil record, dating back about 385 million years ago. Gradually, these fish evolved to have more features which were common of terrestrial creatures at the time.

What differentiates mammals from reptiles is the diverse nature of the vertebral column. For example, in mammals there is a small ‘cervical’ vertebrae that makes up the neck. The ‘thoracic’ vertabrae contains the rib cage and supports the chest, and the ‘lumbar’ spine is at the base of the spine. In contrast, reptiles and amphibians have relatively very uniform backbones (although it is suggested that there is some level of distinction in the vertebral column of reptiles too).

We can see this in the image below (where ‘zygapophysis’ in general refers to the degree of articulation between the various vertabrae). The mammal skeleton ‘(A)’ has distinct segments in the vetebral column, whereas the skeleton of the reptile has broadly speaking only 2.

These distinct regions of the mammalian spine enable specific functions to occur such as respiration, running and climbing.

Functions of the spine

The spine in the human body serves a number of key purposes.

The spine contains the spinal cord where all information transfers from the limbs of the body to the brain and from the brain to the periphery of the body.

In order for an organism to protect itself, it needs to be able to see clearly all around it. The skull sits on top of the spine and therefore enables the best view to arise.

The spine has a number of curves, which serve as the most optimal means of distributing and offsetting the stress from both gravity and ground reaction forces (ie from the ground up). This is the same shape as roman arches. Arches are known to support the distribution of stress throughout a structure.

The essence of breathing is the shape change between the chest and abdominal cavities. As the spinal is mobile and compressible, it facilities the movement of the rib cage and the abdomen so that breathing can occur.

As the main pathway for the central nervous system, it enables consciousness to arise. 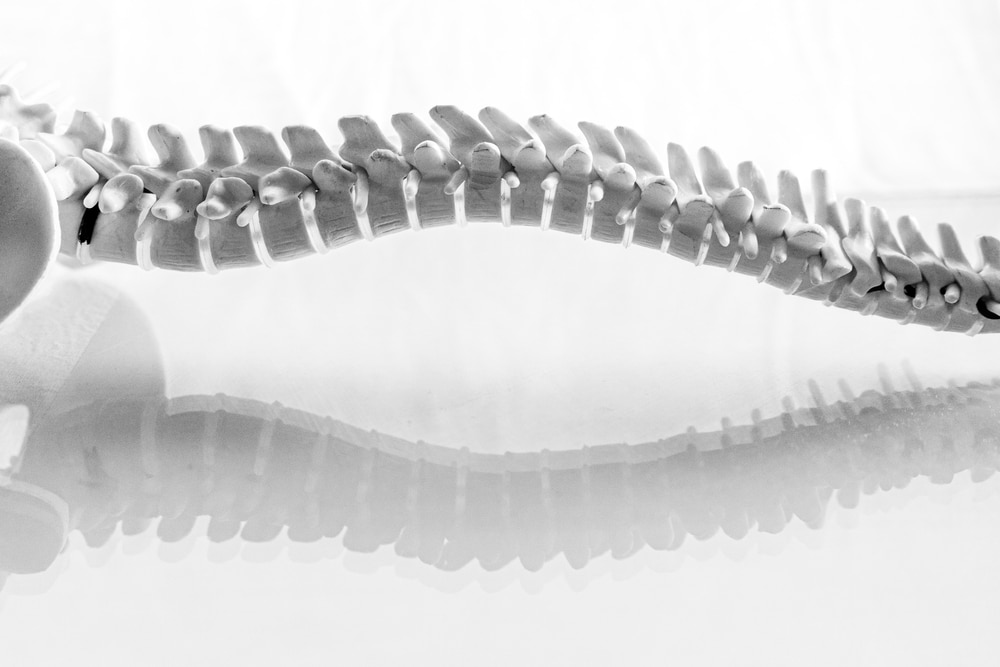 The structure of the spine

When thinking about the anatomy and biomechanics of the spine, there are two ways to approach it:

Each is probably appropriate. However from a more functional perspective, the spine is the most effective when the spinal column and the pelvis work together.

The structure of the spinal column provides the most stability and mobility according to the nature of stress and the demands that are placed upon it.

Starting at the bottom, the vertebrae are thicker and the intervetebral discs are plumper.  This supports stability at the base (which is the most desirable). The joints arrange in a way which support maximum stability and the least rotational or lateral movement.

As we ascend the spinal column, the thickness of the vertebrae gradually narrows and the angle of the joints changes to facilitate more rotation in the spine. This makes sense from an evolutionary perspective – we want more stability at the base of the spine and more mobility towards the top of the spine.

Each vertabrae has two sets of facet joints (two upward facing (superior) and two downward facing (inferior)). They are the true joints of the spine itself – they connect each vertebrae. These joints govern how much each segment of the spine can rotate (and also side-bend). One description of the facet joints is that they look like ‘ears’ or ‘feet’.

Let’s now look at each of these segments in turn. Each vertebrae contains a number of vertebrae which represents the vast majority of humans. In some cases though, there may be more or less, which is a general indicator of human variation. 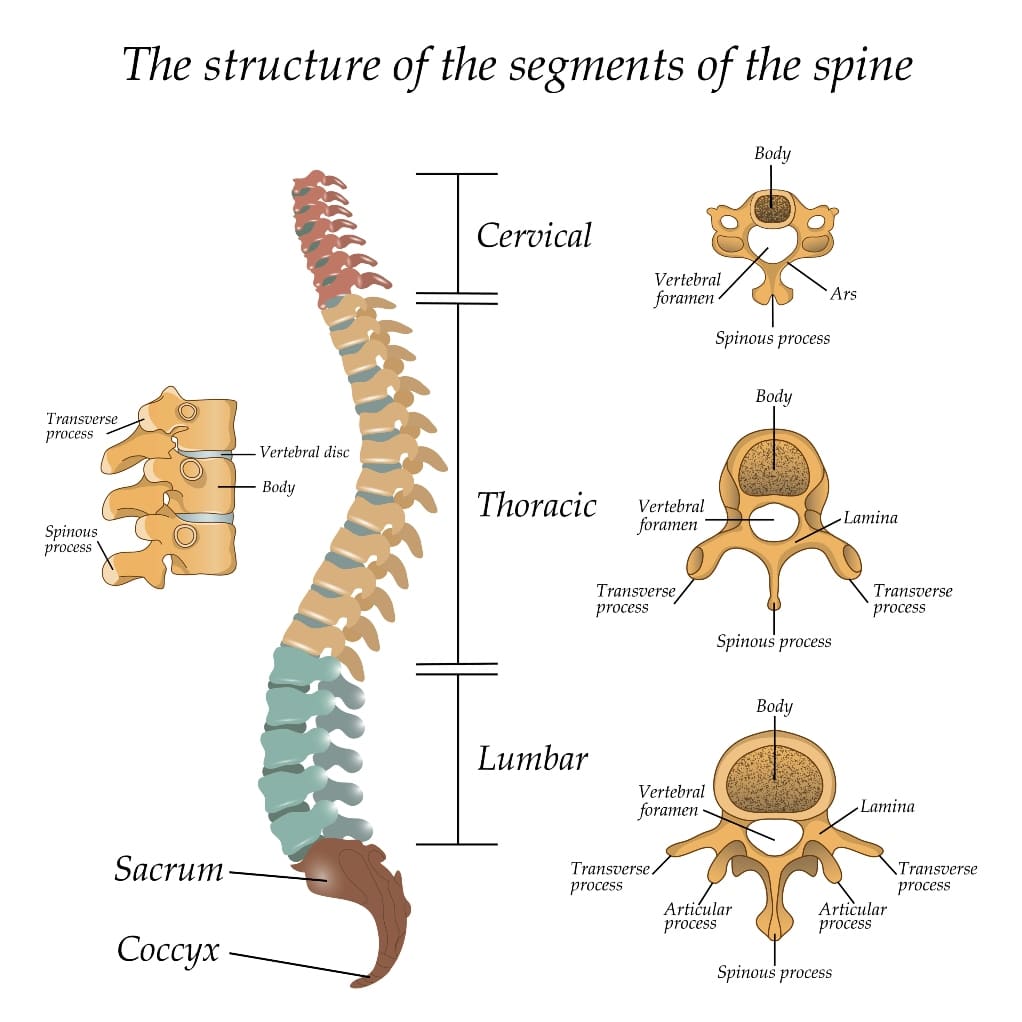 There are 7 vertebrae in the cervical spine (ie the neck). The shape of the facet joints in the cervical spine facilitates the most movement on average across the spinal column. In addition, the position of the bony protusions at the back of the neck (which you can feel, the ‘spinous processes‘) also support maximal movement.

The cervical spine supports the skull and protects the brain stem and spinal cord. The two most important landmarks in the cervical spine are the ‘Atlas’ (C1) and ‘Axis’ (C2). These two vertebrae enable rotational movement of the head.

There are 12 vertebrae in the thoracic spine. It is known as the ‘thoracic’ spine because it houses the ‘thorax’, otherwise known as the ‘rib cage’. Given that the heart and lungs reside in front of it, it is the region of the spine that supports the least extension of the spine.  When we perform a deep back bend, the middle part of the spine is always straight – it is impossible to bend it beyond that point. This is because the spinous processes each point downward.. The vertebrae are also much closer together.

Although we like to refer to heart-opening poses in yoga, the reality is that such poses ‘compress’ the heart as the thoracic spine is located directly behind it (between T5 – T9). Such poses may have value from a psycho-emotional perspective though.

That said, because of the relatively horizontal shape of the facet joints in the thoracic spine, they more easily support rotation.

The shape of the spine curves slightly outwards. As this curve develops in the embryonic development, it is known as a ‘primary curve’. This is known as as a ‘kyphotic‘ curve.

Similarly to the cervical spine, its curve is known as a secondary curve, and is lordotic in nature.

The sacrum has a triangular-shape that fuses the pelvis and spine together (see image below).  It has five vertebrae. It articulates with the lumbar spine. At the base of the sacrum are five additional bones which comprise the tail bone (or coccyx). 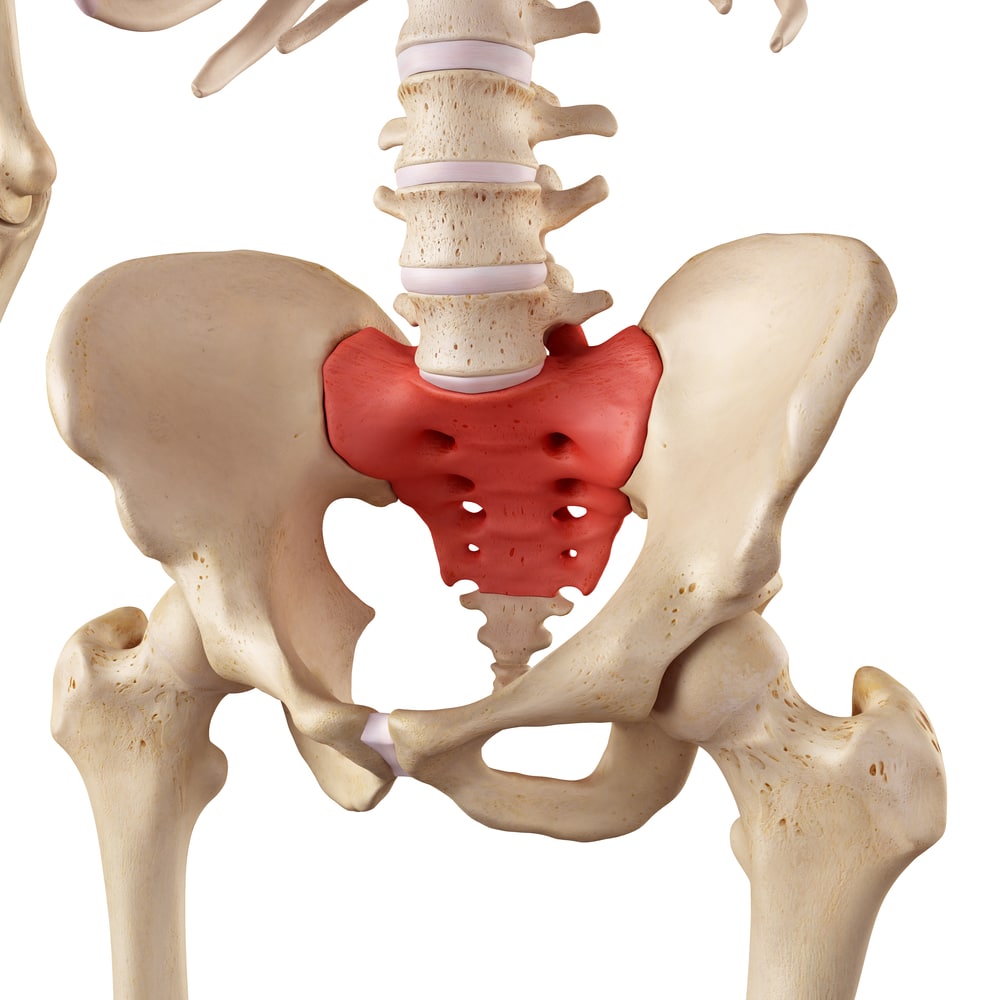 Within each of the vertebrae are the discs that provide support against stress to the spinal column. These discs comprise largely of water, collagen, and other proteins which attract water (proteoglycans). The amount of water that the rings contain varies throughout the day. Upon rising from sleep, the discs contain the most water. This is why you feel stiff when you wake up – your discs are full of water. It is also the reason why you will be taller first thing in the morning as the discs are more plump. To this extent, waiting half an hour or so before commencing moderate exercise can help support spinal stability.

The discs comprise of two parts – an outer fibro-cartilaginous ring (the annulus fibrosus) and the inner most ring (the nucleus pulposus). The outer layer has rings which run in an oblique direction and each layer runs counter to each other in a cross-hatched pattern. What this means is that the discs support rotation but also provide resistance to that rotation. So when we activate all of the oblique muscles, we facilitate greater stability in the core of the body.

So, the cue in yoga to ‘draw your naval to spine’ in its own right isn’t necessarily the most efficient cue. In order to maximise spinal stability, activation of the obliques and other muscles that support the core on the outside (lateral) side of the body is required. 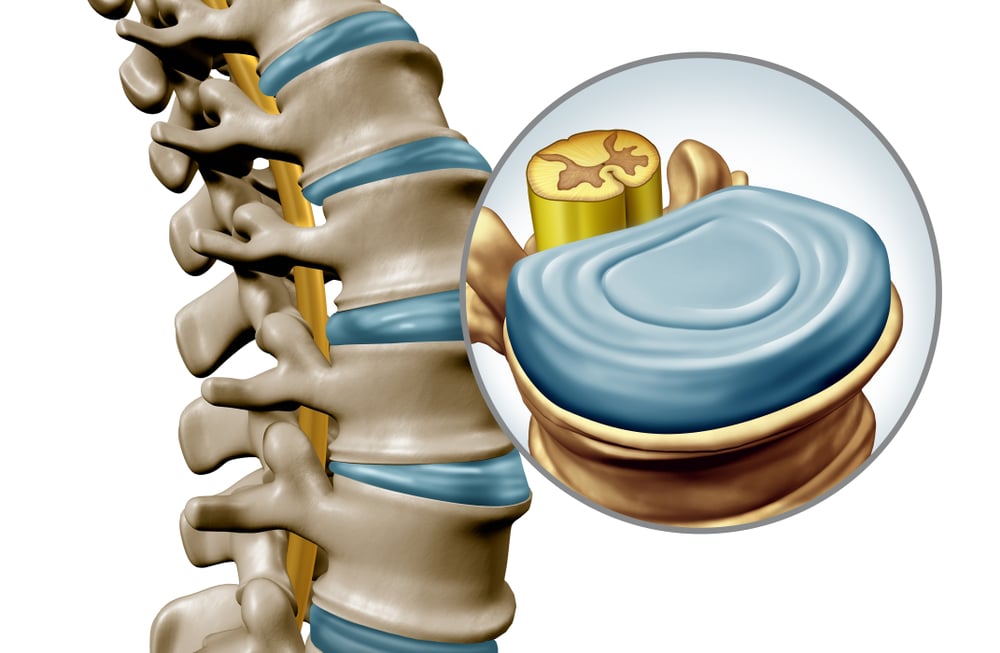 The spine is revered in traditional hatha yoga. It is seen as the conduit of the deep life force (pranasakti). Most commonly known as ‘sushumna’ (the most gracious channel), it also has other names:

At the time of the middle ages when traditional hatha yoga was most prominent, the focus of the practice was to get energy into the spine and prevent it from dissipating. The aim was to control, direct and regulate the vital life force of the body. The science of the day was alchemy and the focus was the transmutation of the body – through heat and pressure.

The aim of practices such as pranayama, bandha, mudra, kriyas (and asana) was to direct energy into the spine. The pelvic floor and throat were sealed. Then, they looked to magnify the energy within the core of the body. This is known as ‘maha mudra’.

The goal of hatha yogis was to have an experience of the divine by drawing energy from the base of the spine to the crown of the head (ie kundalini). 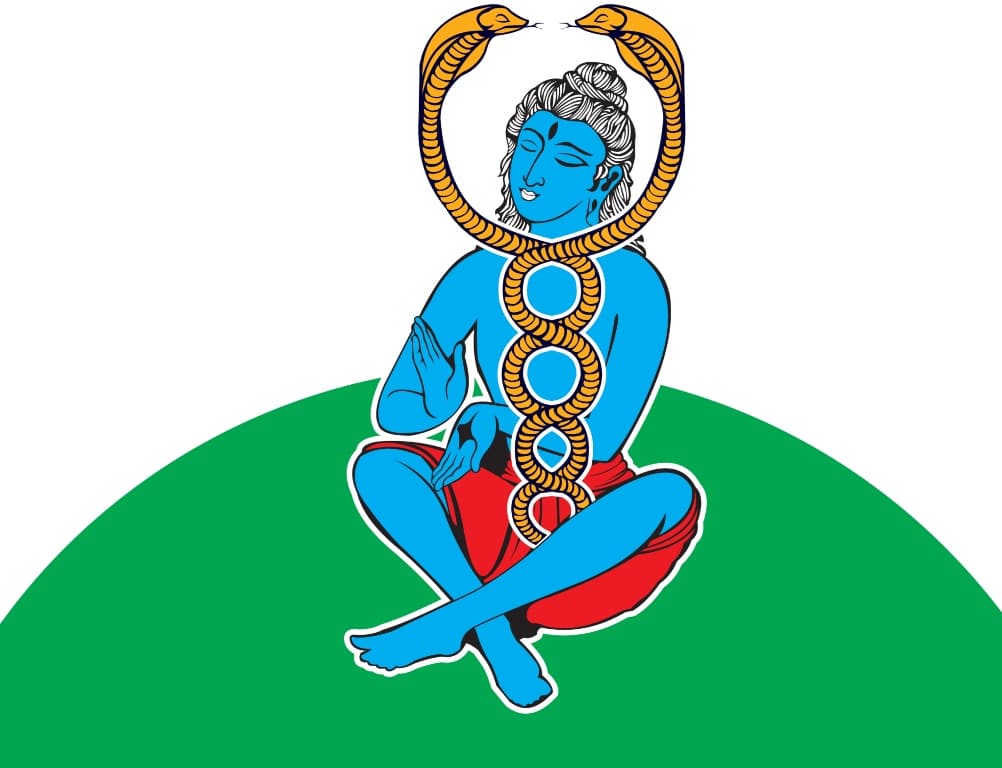 In today’s era of modern yoga, we still revere to the midline, albeit for a different purpose! In poses such as downward-facing dog (ado mukha svanasana), easy pose (sukhasana) or corpse pose (savasana) coming back to the midline presents an opportunity to recalibrate and re-establish the cadence of breathing. It brings qualities that ground us (sthira) to establish the good space (sukha) that the practice of yoga provides.

The anatomy and biomechanics of the spine are complex and is best understood by understanding its key components and how they work together. It is interesting to note that the spine has been the central feature behind the evolution of human beings – from fish to the modern mammals we are today. From a historical perspective, the spine has always been worshiped in hatha yoga as being somewhat sacred. In the modern era of yoga, it is seen as a means of coming ‘home’.

E Pennisi, The evolution of the spine fueled the rise of mammals – and human back problems, Science, 20 Sep 2018.

With gratitude to Tias Little and Jason Crandell for their dedication to teaching the art and science of yoga.

If can help you with starting a yoga practice, please feel free to get in touch or email me at scott@yogibanker.com

What is flexibility and mobility?